Sheffield in the Spring

Well, not quite Sheffield– more like the lovely rural setting of the village hall in the exotically 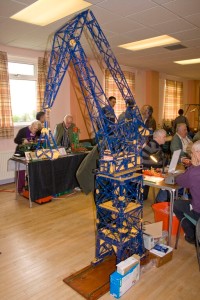 named Laughton-en-le_Morthen. That was the recent Spring meeting of the Sheffield MeccanoGuild, one of the great English Meccano Clubs for enthusiasts young and old. On the agenda this time, the spring Competition and the eagerly awaited auction of bits and bobs.

The competition this time involved creating a vehicle powered by a No 1 Clockwork Motor – which went furthest – which went fastest – in a league knock-out competition. Only snag – the power could go anywhere but to the wheels! So we had powered feet, walking sticks, propellors – all sorts of ingenious devices. From those which barely got started to those which threatened the far wall of our long hall – there was much excitement at our own (much safer) version of the Grand National. Who cared that there was another race going on?!

The auction produced the usual array of bargains, oddities and treasures, refreshments were as always sumptious and the tables were packed with a wide range of models large and small. Well done to all concerned!

1 Response to Sheffield in the Spring