There is something about a Meccano rubber tyre that says “Motorbike“. They have never been that good when it comes to modelling 4-wheeled vehicles – they were typically low in profile and round in tread – little more than rings, really, but they did offer a whole range of possibilities for the bike modeller. Each size of rubber “tyre” has its own possibility, and in these pictures you can see a range of different vehicles, all instantly recognisable despite most being built from a relatively small number of parts.

In this smallest model shown here, 1/2″ tyres are used and you can see the long front forks, “ape-hanger” handle bars, a “Harley” style tear-drop fuel tank, a “King and Queen” seat and swept-up “chromed ” exhausts typical of a “Chopper”.

Moving up a scale the 1 1/2″ wheel fits in well with a model of a “Cafe-Racer“. It was based on a small model issued by Meccano, but like a number of designs it could have been better! Handlebars, for instance, aren’t fitted to the fairing, but to the forks – how else could you turn corners? The recently added flexible rubber “seat” part is very useful in models like this. Clip-on handlebars, front and rear lights, a fairing, a rear disc brake and rear “pegs” for the pillion rider can all be included in this scale.

The next size up means using a 2″ Pulley and tyre – in this instance I have actually used the Stokys equivalent to produce a model of a Harley Davidson Electraglide. By now you can see all the characteristic elements of a Harley appearing – tear-drop tank (of course), a twin cylinder air-cooled engine, side panniers and top box, front fairing, light bar, instruments and hand-controls, etc. Not so much an Electraglide in Blue as in an Electraglide in Meccano red, of course! This had its beginnings in a kit one of the European clone systems, but it was full of custom plastic parts and had wheels that were half the scale of the body! So I set about building my own version to see what Meccano could do by way of a response.

After this, of course, you’ve got to try a model using the large 3″ Pulley and Meccano tyre. This was my first attempt at such a model. The engine block is based on a design by the Els brothers of South Africa, but otherwise the design is my own – it is actually less specific than the others, but I hope it still captures the essence of the big modern bikes.

Many years ago I produced another set of four bikes taking up ideas from the Meccano Magazine which again show how many different models can be reproduced. Here you have another simple but effective model of a circuit-racer produced by BRAL, a Meccano clone. I actually bought this at the Brands Hatch racing circuit! Then there are models of an Italian Scooter from a Meccano Magazine picture, and a small moped and a motocross bike, both from the columns of old Meccano Magazines.

Next? Well, the  so-called “Ashtray” tyres that used to be sold by tobacco companies as souvenirs crop up occasionally – I have a few that are the right sort of profile – and they are 6″ across … so watch this space! Mind you – it will take some effort to beat this model which features in Meccano’s latest advertisements. 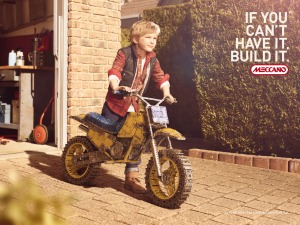