The Great Shutdown of 202 had many of us thinking that it was an ideal time to tackle some modelling – assuming the gardening, decorating, clearing out the garage, etc, didn’t take over first! As the weeks went on, I found time for all of the above, but evenings certainly offered some space for building. What to choose?

I thought I’d revisit one or two of the classic 10 set leaflets and the Beam Bridge (better described as a Bascule Bridge) appealed to me. I had built a version in yellow and zinc many years ago, but with a growing collection of red-and-green and more experience I thought I’d tackle it again in the classic colours of my childhood.

I worked closely to the instructions but inevitably there were deviations since I wasn’t too concerned about set limits. 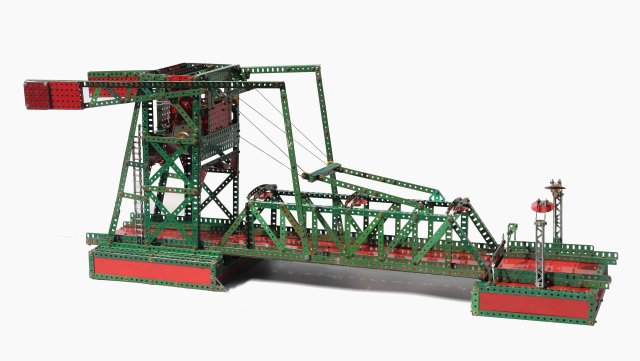 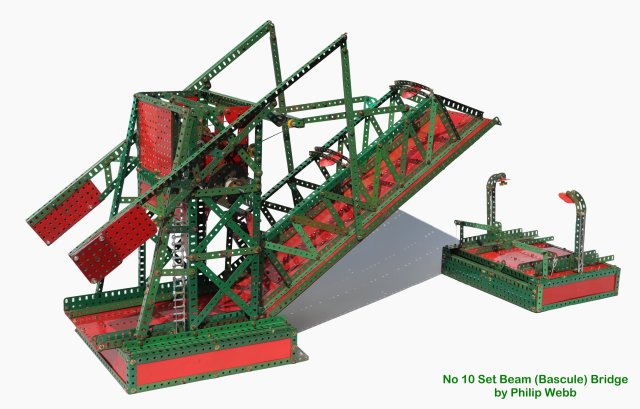 I decided for instance not to put in joining strips between the two piers. Neither was going anywhere and I didn’t like the idea of passing ships having to climb over them! On the smaller pier I altered the lamp posts, replacing the right-angle top arms with pairs of curved strips and then adding an Erector braced strip to one face of each for detail. I decided not to add the railings of the original model – I thought the Flat Girders suggested enough of the barriers as it was at this scale – and I altered the direction of the flanges on the lifting span to give an uninterrupted passage to vehicles.

On the main tower I added a little more bracing, not least in the construction of the rear buttresses. I also inserted a fixed ladder to give access to the engine room, together with an internal catwalk inside the rear doorway. There is also more diagonal bracing in the lifting arms.

Construction of the model itself is pretty straightforward, though I did opt for a Hinged Flat Plate to serve as the pivot between the lifting span and the main pier – the suggested method led to either unwelcome gaps or nasty grating noises in my experience! This was much simpler.

I built up the motor drive as instructed using an E20R motor together with the specified gear-train, but I was alarmed at the slow hoist speed that resulted – it was positively glacial! I added considerable weight to the counterbalances to reduce the load on the motor, packing the space inside a couple of Flanged Plates with Flat Plates and adding more outside. This obviously did not increase the speed, so I replaced the E20R with a proprietary geared 6-12v motor with suitable external 2-stage gearing and all was well. The other alteration was to the cording: the original had two separate cords, each running from a drum over the lifting arm attached to the span and then back again. To equalise the load, I replaced these with a continuous cord that, at the face of the tower, ran over a pair of pulleys on a pivoting frame. This way any change in load between the drums was equalised.

All in all, quite an elegant and satisfying model to build and operate.