The Eagle had landed …. 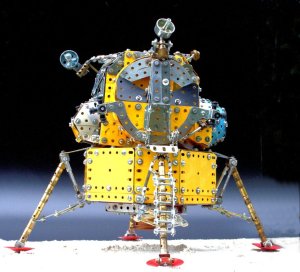 In 2009 I was in nostalgic mood – probably because I was facing a significant birthday that summer!  Time to look back to days when the future seemed full of hope, any dream was possible and any problem could be solved if you could throw enough money at it. And so back to my undergraduate days (ignoring such things as student riots, segregation, Viet Nam, etc) and the biggest dream of all – a round trip to the moon!

To those of us raised on Science Fiction films and comics, be it Dan Dare, Flash Gordon, or the then new TV series, Star Trek, we all knew that space ships were sleek and smooth, shaped like disks or projectiles. But then came reality in the shape of the LLM, that little payload which was to sit shrouded at the head of the mighty Apollo Saturn V Moon-rocket.  It went through various design stages, but what emerged was unlike anything we had imagined. Angular, spidery and multi-faceted, it was a triumph of function over appearance – it did precisely what was needed – to deliver two men safely from lunar orbit to the surface and then return them to orbital rendezvous with the Command Module – and no more.

Ever since those grainy black-and-while pictures were first beamed back from the surface of the moon on July 20th 1969 it has been an iconic machine – but it has rarely been modelled in Meccano! (There is actually a 4 ft tall version in Meccano’s own official displays, though frankly it’s not the best it could be.)

There were various plastic kits around in the following years, of course, notably from Airfix, Revell and Monogram, and I was glad to have these to hand as examples. By now there is also a wealth of archive material available on the internet, so armed with these and my own reference library I decided to have a go at an anniversary model.

I toyed around with various scales, but settled eventually for one which enabled me to model the landing legs in brassware, i.e. at 3/8” diameter. I made scale drawing from there and when I found that other dimensions could be matched to standard Meccano lengths and widths of plates and strips I blew up some drawings to the size of the proposed model and began work. (Always a useful technique when you are as concerned with form as with function – being able to offer up parts to the drawings and see if they match is a great help.) The legs were made from stacked Long Bosses, though any equivalent length of brassware would do. Conveniently enough the “feet” were the size of Conical Discs, and Narrow Strips and Rods held in Rod and Strip Connectors formed the supports.

The Landing Stage was made up from Flexible Plates and 7×5 Flanged Plates joined by Obtuse Brackets, with a 6” Circular Plate forming much of the lower surface and a plastic Wheel Core representing the bottom rocket nozzle.  Plates filled in the top of the octagon, with 5×5 Triangular Plates filling in the obvious sections. I found it easiest to fix these by punching one extra central hole on the hypotenuse of each – that way it could easily be bolted to the side plates. Why did Meccano never include that hole?

The Ascent stage was much more of a challenge! Its central core was made from Flanged and Flat Plates, but the irregular and multi-faceted surfaces were more difficult.  A large variety of triangular parts were used in overlay, ranging from traditional 5×3 Flexible Plates through 1.5” Corner Brackets to several varieties of the modern dished triangular parts. Thus the side panels and the bulbous lower housings grew.

Small conical rocket nozzles were represented by Rubber Pulleys over Narrow Plastic Spacers on Long Bolts, and communication dishes were represented by Wheel Hubs from the 3-parts wheels of the late ‘70s. Modern parts such as the 1” wide Flanged Plate and a pair of Obtuse Strips were also used to mount the dish at the top front.

Bit by bit the model took shape and at last I was satisfied. I mounted it on a large piece of board which I covered with a coat of plaster in which I created “craters” and other features reminiscent of a lunar surface.

I was pleased with the result and other people have made kind comments about it –it was certainly very well received when on show at the National Space Centre! I’ve already had requests for a ModelPlan – maybe one day!

I realised in building it that without today’s range of parts I could not have built as accurate a model, so perhaps waiting 40 years was worth it. And of course, any such “homage-model” reminds one again of the brilliance of those who designed the original, and the courage and skill of those who travelled in it.

Chairman of the International Society of Meccanomen
View all posts by Philip Webb →
This entry was posted in Space. Bookmark the permalink.