Another Minion? We’ve looked at these little creatures here before, and when I took “Kevin” along to the recent show at the Abbey Pumping Station in Leicester he provoked many squeals of delight from the children who walked into the hall and caught sight of him – “It’s a MINION!”

By the time he came back to the workshop he needed some maintenance so I took the opportunity to make some changes, and the result is the guitar-obsessed teenager from the film “Minions”, aka “Stuart Van Halen”! 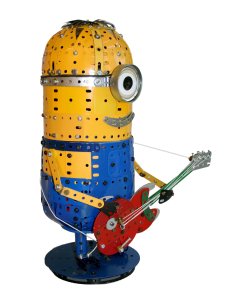 Chairman of the International Society of Meccanomen
View all posts by Philip Webb →
This entry was posted in Uncategorized and tagged guitar, Meccano, Minion, Stuart. Bookmark the permalink.