An elite hotel room – in a crane!

Harlingen is a municipality and a city in the northern Netherlands, in the province of Friesland on the Wadden Sea. An old town with a long history of fishing and shipping and a current population of 15,769, it received city rights in 1234. 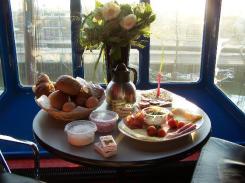 Breakfast with a view!

working out the ambient controls 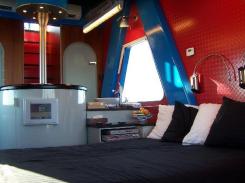 View from the entrance

Built on the coast of the Waddenzee opposite the West Frisian islands of Vlieland and Terschelling, it was founded in 1243 near the site of the town of Grayn, which was engulfed by the sea in 1134. The harbour of Harlingen, which was formerly a considerable trading town, still exports Frisian products and imports coal, timber and other industrial raw materials. In the harbour area are shipyards, fish- processing plants, woodworking factories and works producing building materials. There are ferries to the islands of Vlieland and Terschelling. The harbour is linked with Leeuwarden by the Van Harinxma Canal.It is a pleasant place to wander round on a summer’s evening and offers some good restaurants for the tourist. Today, though, it is probably most famous as the home of a one-bedroomed Bed-and-Breakfast housed in a dockside crane which has been converted into a luxury hideaway for two.

The website www.unusualhotelsoftheworld.com says of it, “This is a genuine dockside crane which has been the recipient of intelligent engineering and dedicated devotion rarely seen in a private home – let alone in a hotel property. Replacing the external ladders with modern lifts to gain entry, the old machine room in the body of the crane has been transformed into a luxurious bedroom that would not be out of place in the most modern of design hotels.

Managers Willem and Carla have managed to keep the existing observation windows and industrial feel, but have added comfort, warmth and the latest flat screen and audio equipment to create a fantastic environment to enjoy a boyhood dream for many – your own personal, WORKING crane.”

Set at the end of a quiet stretch of dock the crane is now fixed firmly to the ground. A small lift takes the two guests up one leg to the first stage, and then a few steps along a gangway lead them to a cosy lift built into the central pylon. A foot-operated switch starts the platform rising through the narrow tube until they arrive in the very centre of the converted cabin. If you have large suitcases with you, leave them in the car!

There, in the heart of industrial chic you will find a tiny kitchen unit on one side of the entrance pod and a luxurious double bed on the other. Next to this is a control panel which operates ambient controls including a whole range of lighting options for the en-suite luxury double shower and controls for externally mounted floodlights. Next to that is a designer loo and between the two units is a short fixed ladder leading up to the driver’s cabin where you can sit with a splendid view of the whole town. Just one control has been left in place – a joystick which allows you to rotate the entire superstructure slowly to any orientation you like. Pick your view! If you can face climbing a few more rungs from here you can reach the roof of the cabin, suitably railed off, where there is a picnic table and benches for those who fancy the airiest of breakfasts!

Back down inside the cabin there is a large flat-screen TV and DVD player opposite the bed, and at the back there is a vast bay-window with a coffee table sitting between swivel chairs. A pair of binoculars has even been provided, along with a photo-history of the restoration project, so you can watch the ships coming in and out of the busy little port.

The evening is yours to spend as you will, but once on board your privacy is complete. When a fresh Continental breakfast arrives in the morning, it does so neatly arranged in a basket which rises by itself on the lift into the middle of your room.

It is an out-of-this-world property – staying here guarantees you stories to tell your friends!

This bit of sybaritic self-indulgence doesn’t come cheap – prices currently start at €319 per night, but the memory will live with you forever.

For the technically minded this crane was built to handle cargo by Figee; it was level-luffing with a single-fall hook and would have been rail-mounted. The jib was luffed by gear-and-quadrant. As presents go, I don’t think my wife has ever come up with a bigger surprise than this! It was a wonderful experience back in 2010, not least for someone who is mildly crane-obsessive like me. You may not be surprised to know that I am finally getting around to building my own Meccano tribute to this remarkable holiday destination.

(This article also appeared in the NMMG’s Newsmag in 2015)

1 Response to An elite hotel room – in a crane!