The Internet has had a mild buzz recently over the latest venture by James May of “Top Gear” and “Man Lab” fame. He has already fronted up a BBC TV series looking at extreme uses for classic children’s toys such as Lego, Plasticine, Scalextrix, and of course Meccano. It looks like he has decided to go back to the best of the lot for a Christmas 2013 special. This time the challenge was to produce a full-sized Meccano motorbike which could trundle round the Isle of Man TT course!

I have seen various bike models, large and small, but I would have said this ambition couldn’t have been achieved without recourse to lots of non-Meccano parts – but it was! I take my hat off to Simeon, James’ sidekick and the designer and engineer.

Geoff Brown, chairman of NMMG, was down at the annual Gathering at Henley-on-Thames on the usual Saturday following the August Bank Holiday. But for a family wedding, so would I have been! And the bike duly appeared at the Gathering to the surprise and delight of all.Geoff reported: “This really eclipsed everything in the Meccano World this p.m. Just got back from the pub to find that Simeon and his mate were motoring down the M6 on their way back from the island when Sim’s mother phoned to say there was a Meccano show at Henley and why didn’t they call in! Sim lives in Watlington and his mate in Reading so it was handy enough! We had the time of our lives with the cameras, the bike and these two most obliging of guys!” 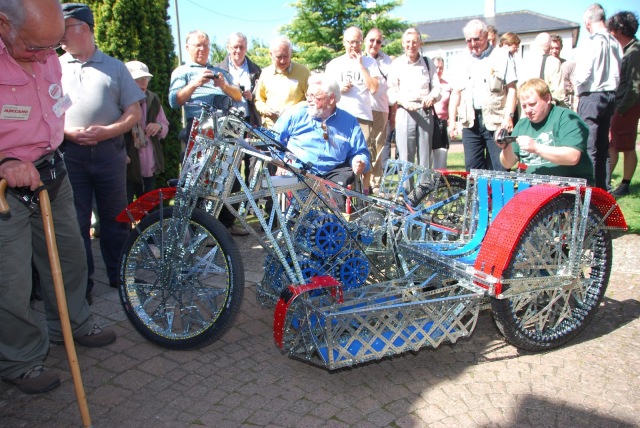 Peter Finney records the details: “I discussed (construction) with the builders. There were no large-axle parts used. The bearings were built up using standard Meccano parts – ball bearings using standard Meccano balls. The wheel hubs are built up using multiple Meccano (or perhaps 4mm) screwed rods. The most impressive facts abut this model (IMHO) are: