There’s another truck on its way …

A GMC (or a “Jimmy” in old trucker slang) since you ask. But you can’t keep building trucks without putting at least some of the transmission system in them! In addition to suspension, steering differentials and prop shafts, there really should be a gear box.

So this time I have gone for a six-speed box (6 forward, 2 reverse) using the splitter design first envisaged by the late Tony Bolton. This takes a three speed and reverse box with a linear change and adds a splitter to it, and the gear lever is arranged so that moving it in one direction (left-right) changes the major box, while moving it in the other (up-down) changes the splitter box. An ingenious use of gears pioneered by Richard Payn produces a splitter ratio of root-two, 1.414, or thereabouts, which means that each ratio increases by a regular factor. That means you would change at about the same rpm setting in each gear, and each gear ration is uniquely selected by one position of the gear lever so you won’t get gears clashing when two ratios try to engage at once. 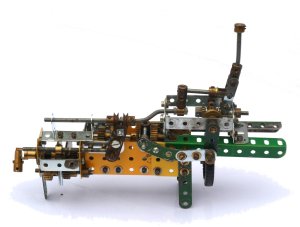 As so often the ratios and choice of gears is a numbers game – just get your calculator and your spares box out and play. The trickier bit is making a suitable selector mechanism and then getting the whole thing to fit inside the chassis rails! So far so good…..

Next post – hopefully you will see it in the chassis and with controls being added as well. For more on this sort of thing, check out “Everything Automotive 3” published by MW Mail Order. 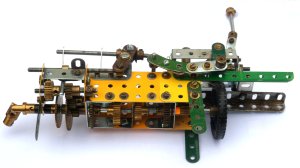 A view from underneath

Chairman of the International Society of Meccanomen
View all posts by Philip Webb →
This entry was posted in Trucks, Workbench and tagged 6-speed, automotive, gearbox, GMC, Mecccano, Transmission (mechanics). Bookmark the permalink.